The noisiest residential area in Switzerland - the houses north of Freudenbergplatz in the east of Bern - loses its top position. As part of the breakdown lane reuse on the A6 motorway, dimensioned noise protection measures are being implemented by Grolimund + Partner. In the 15 years since the start of planning for the pilot project, G+P has contributed its many years of know-how to provide the Federal Roads Office and residents with customised solutions for noise protection.

To increase the flow of traffic, the Federal Roads Office (FEDRO) is installing an emergency lane reuse (PUN) on the A6 motorway between Wankdorf and Muri between 2021 and 2023.  This will allow additional lanes to be temporarily opened at peak times. Grolimund + Partner has planned extensive noise protection measures over the last 15 years, which will be implemented as part of the construction work for the PUN. Firstly, a noise-reducing surface will be installed on the entire section. Secondly, new noise barriers will be built and existing ones replaced in several areas.

By means of a three-dimensional noise model, G+P has investigated the impact on noise pollution of driving on the additional lanes. As a result, G+P has specified complex, cantilevered noise barriers, particularly to the north of Freudenbergplatz, which in some cases significantly increase the quality of life for residents. 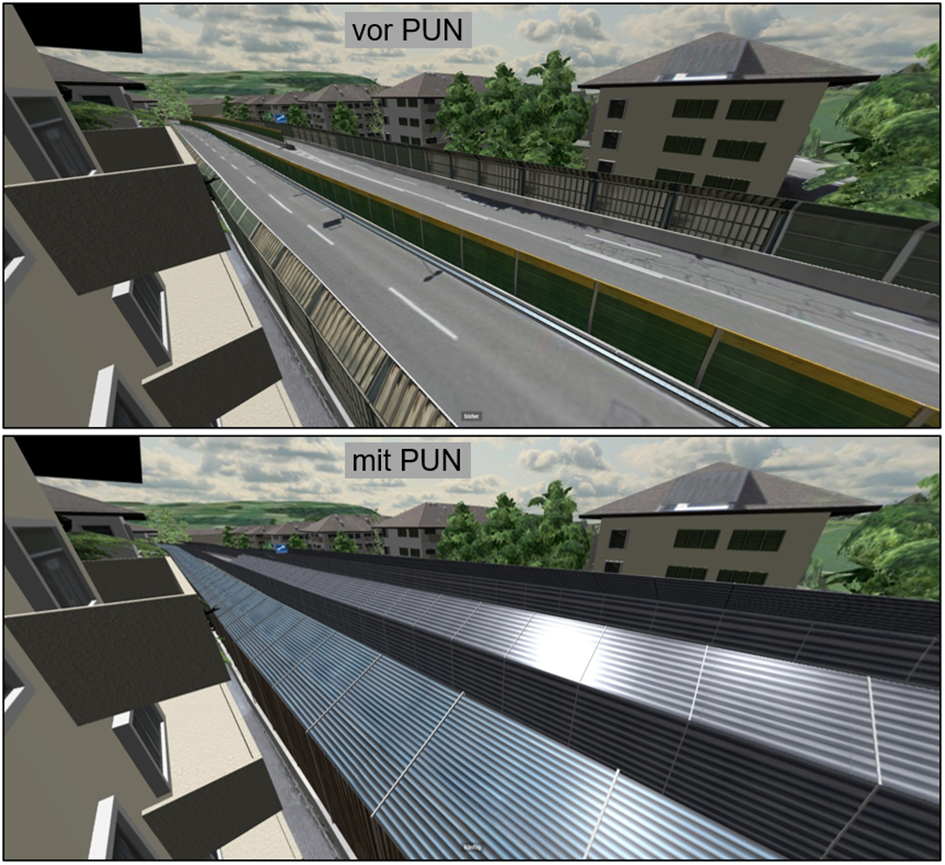 Visualisation of the cantilevered noise barriers north of Freudenbergerplatz before and with the PUN project (Source: ASTRA).

Construction during operation places the highest demands on everyone involved. From an acoustic point of view, the detailed noise protection planning during the construction activities was challenging. This is because the road noise during the approx. 2-year construction work leads to higher noise pollution due to the temporary lack of noise barriers. In addition, there is construction noise, some of which also occurs during the night.

G+P has responded to these treacherous challenges. Together with FEDRO, a wide range of partly unique, innovative solutions were planned and implemented against both construction noise and road noise. Firstly, noise protection mats between the buildings prevent noise from entering the neighbourhood unhindered. Secondly, noise protection curtains in front of the façades reduce the noise exposure for the living spaces on the road side. 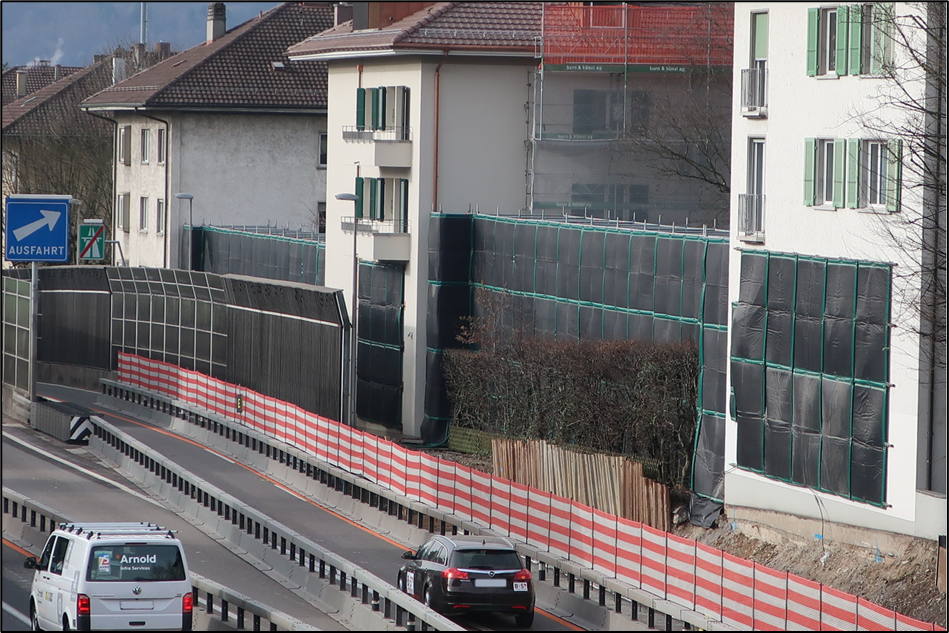 The measures implemented by G+P against construction noise, which also include extensive noise and vibration monitoring at numerous neighbouring properties, lead to temporary protection of approx. 200 flats around Freudenbergerplatz.

Bern East Bypass as a vision for the future

The A6 motorway between Bern and Thun was opened at the end of the 1960s. The lane routing planned at the time in the east of Bern did not always take existing residential quarters into consideration. Having the motorway right on the doorstep was more important than noise protection back then.

In 1969, shortly before the opening of the motorway between Thun and Bern, the section north of Freudenbergerplatz had not yet been built. 50 years later, massive noise barriers are visible to protect these properties (source: keystone, FEDRO).

The noise protection, planned by G+P as part of the PUN, will sustainably improve the noise situation in the entire section between Wankdorf and Muri. However, the PUN is only a transitional measure until the Bern East Bypass is implemented in about 25 years. G+P has been intensively involved for five years in this visionary project, which includes a relief tunnel between Muri and the Zentrum Paul Klee. The existing motorway will be partially deconstructed, which will enable the long-awaited urban repair, including in the Freudenbergerplatz area.

Nowadays, a road surface must not only fulfil safety aspects. It should also be as cheap and durable as possible, be able to withstand the emerging traffic load and cause as little noise as possible in densely built-up Switzerland. Low-noise road surfaces are often a good choice here. However, the enforcement authorities responsible for the roads are repeatedly confronted with the following questions: How noisy is the existing pavement? Which low-noise pavement is optimal on which road section? How effective is the newly installed low-noise pavement? Is there potential for optimisation? Grolimund und Partner provides answers to these questions.
Road noise is significantly influenced by the acoustic properties of road surfaces. In order to record these, G+P introduced the first CPX measurement system in Switzerland in 2008. Almost 15 years of know-how and continuous development of the measurement system, through research and standardisation work, have paid off. Our customers benefit from reliable and robust results with the highest repeatability. For the canton of Fribourg, which is fully committed to “whispering” road surfaces, accurate measurement results are essential for the implementation of its noise protection strategy.
Lausanne-Triage station is the most important marshalling yard in western Switzerland. More than 60 km of tracks have been laid since the 1960s. Braking, shunting, impacts and the squeaking of wheels on the tracks are loud and disturb the residents despite the noise reduction measures already taken. G+P was able to measure this noise and identify possible improvements.