Lausanne-Triage station is the most important marshalling yard in western Switzerland. More than 60 km of tracks have been laid since the 1960s. Braking, shunting, impacts and the squeaking of wheels on the tracks are loud and disturb the residents despite the noise reduction measures already taken. G+P was able to measure this noise and identify possible improvements.

The region is crossed by the busy Lausanne-Geneva train line and the N1 motorway. The activities and residential areas are densely populated. Therefore, there are numerous sources of noise. Measuring the noise from railway manoeuvres is very complex because it must be isolated from other noises. For this reason, measurements are made at night, when other noise is at its lowest.

Various measuring instruments in use

A total of seven measuring stations are needed for one month. Four microphones are set up at the railway station near the tracks and continuously measure the emitted noise for one month. These stations are battery independent and their results will be tracked on our web portal. Three more microphones will be placed at residents' homes for a few nights to measure the perceived noise. Five repetitions allow measurements to be taken from 15 people around the marshalling yard.

Extensive post-processing of the data

Our engineers use special software to isolate the shunting noise from other sounds. This work requires special experience. Each noise peak caused by shunting manoeuvres is identified via one or more microphones at the station. Their noise signature can be used to ensure that they are indeed shunting noise. These peaks are observed at the same time on microphones placed at residents' homes and isolated from the ambient noise. The sum of all peaks observed during the night gives the shunting noise level.

Measurement of braking noise at the entrance to the station

This picture shows the peak values of braking noise measured during one night from 10 pm to 6 am. At the height of the nearest residential buildings (red), noise peaks occur during the night on six out of seven nights that are about 30 decibels (dBA) above the background noise.

Measurement of the squeaking noise at the exit of the station

The turning loop allows trains formed in the marshalling yard to head back towards Lausanne. The tight curve causes shrill noises with the wheels of the wagons squealing against the curved tracks. These noise peaks are similar to braking noises, up to 40 decibels louder than the background noise for people living near this loop. 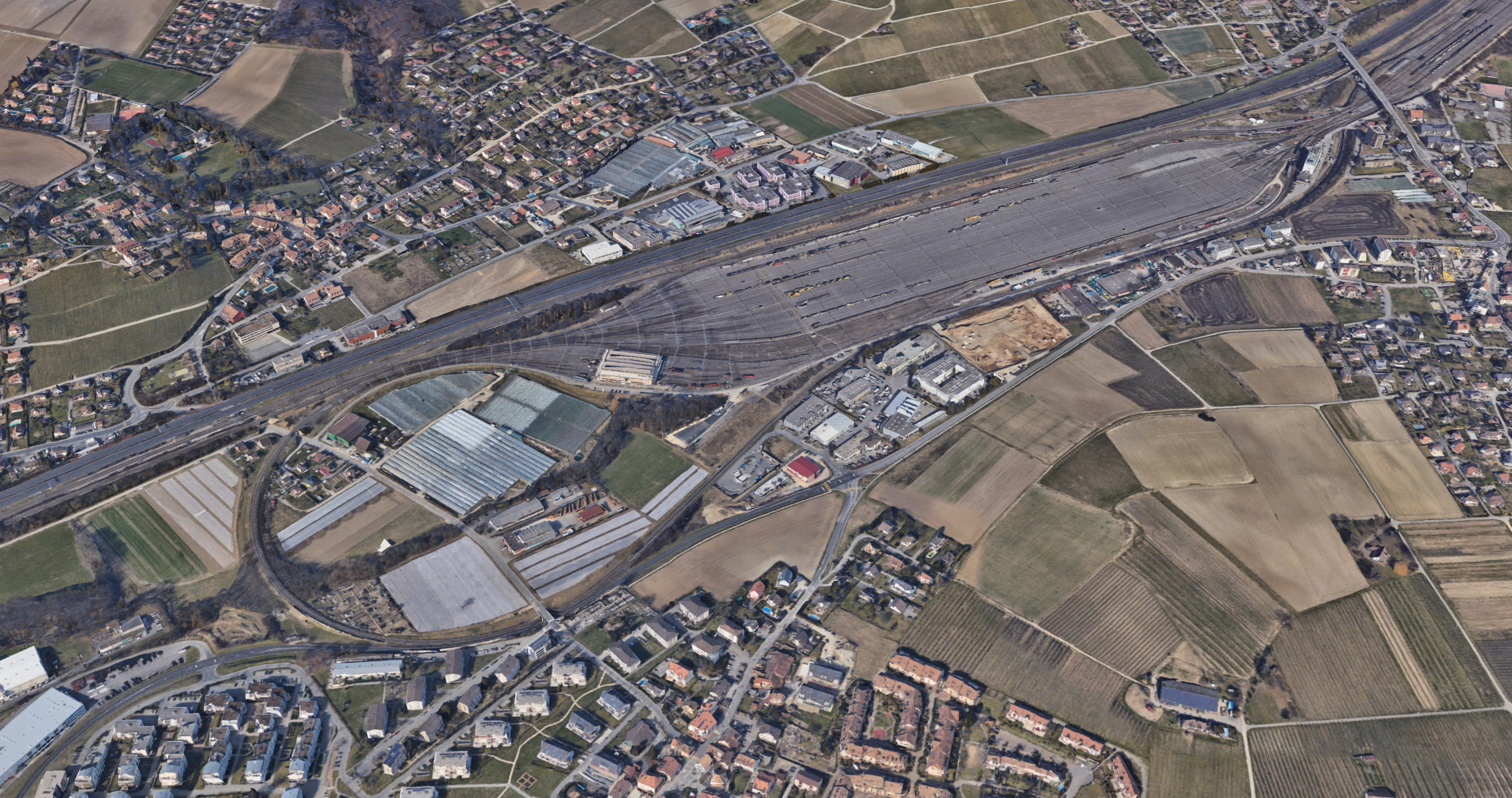 Several measures have already been taken to limit this shunting noise: Noise protection walls around the braking area, modernisation of the braking system, restrictions on working hours, track lubrication to limit squeaking and noise protection windows. The measurements by Grolimund+Partner showed that these measures reduced the noise at night by about 3 to 5 decibels. A reduction of three decibels is clearly audible; it is equivalent to halving the noise source (half as many trains = three decibels noise reduction).

Despite the protective measures already taken, several residents still have their sleep disturbed due to the high average noise level at night and especially due to noise peaks that are significantly louder than the background noise. Continuous noise measurement would make it possible to detect malfunctions that cause unusually high noise and to correct them immediately. Other measures that can be considered included traffic speed within the loop, protection of the braking zone and reduction of activity during certain important sleep periods. The measures must be balanced against the interests of shunting activities.

The noisiest residential area in Switzerland - the houses north of Freudenbergplatz in the east of Bern - loses its top position. As part of the breakdown lane reuse on the A6 motorway, dimensioned noise protection measures are being implemented by Grolimund + Partner. In the 15 years since the start of planning for the pilot project, G+P has contributed its many years of know-how to provide the Federal Roads Office and residents with customised solutions for noise protection.
Nowadays, a road surface must not only fulfil safety aspects. It should also be as cheap and durable as possible, be able to withstand the emerging traffic load and cause as little noise as possible in densely built-up Switzerland. Low-noise road surfaces are often a good choice here. However, the enforcement authorities responsible for the roads are repeatedly confronted with the following questions: How noisy is the existing pavement? Which low-noise pavement is optimal on which road section? How effective is the newly installed low-noise pavement? Is there potential for optimisation? Grolimund und Partner provides answers to these questions.
Road noise is significantly influenced by the acoustic properties of road surfaces. In order to record these, G+P introduced the first CPX measurement system in Switzerland in 2008. Almost 15 years of know-how and continuous development of the measurement system, through research and standardisation work, have paid off. Our customers benefit from reliable and robust results with the highest repeatability. For the canton of Fribourg, which is fully committed to “whispering” road surfaces, accurate measurement results are essential for the implementation of its noise protection strategy.