In narrow track curves of the municipal streetcar network in Bern, it is soon to become quieter! In order to reduce the maintenance effort, BERNMOBIL wants to replace the existing stationary lubrication system with spray systems attached to the streetcar. Grolimund + Partner analyzed this system change. In a measurement campaign, they investigated the complex noise situation of narrow track curves and were pleased to discover: The new system not only reduces the maintenance effort, but also the unpleasant squeaking noises.

Anyone who has ever waited for their rendez-vous at the Zytglogge or drunk their morning espresso in one of the cafés on Theaterplatz in Bern knows the noise: the squealing of streetcars, which can lead to high noise pollution for a short time, especially in small curve radii - such as those found at the Zytglogge. Since streetcars operate primarily in conurbations, a large number of residents are potentially affected by the squeaking of streetcars. The motivation of the municipal transport companies to find efficient measures against these unpleasant noises is correspondingly high.

Video: Sound and image recordings of two crossing streetcars. During the first passing, a flange hiss can be heard, during the second passing, the curve screech dominates.

A proven measure to reduce the noise of curves on railroads is the lubrication of the tracks. On the urban streetcar network of BERNMOBIL, permanent lubrication systems are in operation at all neuralgic curve situations. This measure has significantly reduced curve noise in recent years. Due to the low flexibility and the high maintenance and renewal costs associated with the many systems on the curves, BERNMOBIL invested in recent years in the development of a new, mobile lubrication system, which are installed on the streetcars themselves.

Figure 1: The current system is based on stationary installations, which spray lubricant onto the streetcar rails from several nozzles before the curves (left). The new mobile lubrication system was installed in the 2nd test phase in such a way that 40m before the curve and immediately before the curve entry, GPS-controlled lubricant was sprayed onto the rails (see nozzles on the trolley in the right picture; source: Matthias Rogger, BERNMOBIL).

As part of two test phases in 2018 and 2020, BERNMOBIL and Grolimund + Partner tested the new lubrication system at Le Corbusier Square in Bern-Bethlehem. Since curve noise tends to occur more often in colder weather, the measurements were carried out in November/December each year.  After a successful pilot test in 2018, the first chassis of seven course vehicles was equipped with a spray system for the trial operation in 2020, which lubricates oil onto the rails before the curves in a GPS-controlled manner.

Grolimund + Partner drew on its many years of experience in analyzing noisy squeal events on railroads to measure and evaluate the more than 2,000 streetcar passes. The main objective of the trial operation was to prove that the effect of the new, mobile system is at least as high as that of the existing lubrication systems. 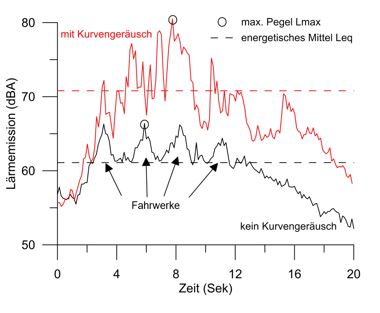 The analysis of the acoustically complex situation by Grolimund + Partner provided valuable insights. Two clearly distinguishable noises were detected: a high-frequency curve screech (streetcar squeal) and a lower-frequency wheel flange squeal (listen to the curve noises in the recording above!). Fortunately, the mobile spraying of the streetcar tracks against both curve noises shows an effect: the share of noisy pass-bys has decreased by almost half, so that only every 6th streetcar emits significant curve noises. The proportion of high-frequency curve screeching, which is unpleasant to the human ear, has been greatly reduced. But not only the squealing of the streetcars has become less frequent - the volume has also decreased by a factor of two to three.

Conclusion: The new lubrication system has a future

In order to put an end to annoying cornering noises, many transport companies are increasingly investing in research into noise-reducing lubrication systems - including BERNMOBIL. Grolimund + Partner supported the Bernese public transport company by investigating the acoustic effect of a new, mobile lubrication system in tight streetcar curves. G+P was able to measure the various noises of the complex noise situation and gain valuable insights: The mobile lubrication system has potential - not only in reducing the maintenance effort, but also in curbing the unpleasant curve noises.

Transportation infrastructures moving ever closer to populated areas, long construction sites in cities, and increasingly sophisticated industrial machinery in workplaces create the need to characterize noise nuisances in real time. For several years, G+P has been using new monitoring-based measurement techniques that allow direct and continuous monitoring of the generated nuisances and enable a faster response.
Nowadays, a road surface must not only fulfil safety aspects. It should also be as cheap and durable as possible, be able to withstand the emerging traffic load and cause as little noise as possible in densely built-up Switzerland. Low-noise road surfaces are often a good choice here. However, the enforcement authorities responsible for the roads are repeatedly confronted with the following questions: How noisy is the existing pavement? Which low-noise pavement is optimal on which road section? How effective is the newly installed low-noise pavement? Is there potential for optimisation? Grolimund und Partner provides answers to these questions.
Road noise is significantly influenced by the acoustic properties of road surfaces. In order to record these, G+P introduced the first CPX measurement system in Switzerland in 2008. Almost 15 years of know-how and continuous development of the measurement system, through research and standardisation work, have paid off. Our customers benefit from reliable and robust results with the highest repeatability. For the canton of Fribourg, which is fully committed to “whispering” road surfaces, accurate measurement results are essential for the implementation of its noise protection strategy.