The Zentrum Bären in Ostermundigen envisages a mixed use of hotel, residential and services. From a building physics point of view, such a realization corresponds to the desire to square the circle. Grolimund und Partner was commissioned to find this for the project, which ultimately succeeded well.The nearby, highly frequented railroad line certainly does not make life any easier for building physicists from a noise point of view. And of course no one wants to hear about the restaurant on the 9th floor, which is surrounded by apartments. Except, whispered behind closed doors, that they have friendly service, fantastic cuisine and an even better view over Bern.

A restaurant in between residential floors

Mixed uses in buildings always lead to conflicting interests. A restaurant naturally wants as much freedom as possible, especially when it comes to noise emissions. The residents of the apartments above and below, on the other hand, want to be spared from this as much as possible. As a rule, there are no standard solutions for such cases. In this case, in addition to the constructive wall solutions in the truest sense of the word, it was also possible to find a good solution with the raised floor builder that met the requirements.
The challenge here was the system structure of the floor as a whole, which from the point of view of building physics formed a longer chain of mass and spring elements. Such a structure is difficult or impossible to represent in conventional models. In an empirical procedure - pragmatic and goal-oriented - experiments were carried out on test areas with different material combinations and their noise behavior was measured in each case. Thanks to the experience as well as the cooperation of both expert planners - raised floor constructors and building physicists - the conflicting interests were fulfilled to everyone's satisfaction. 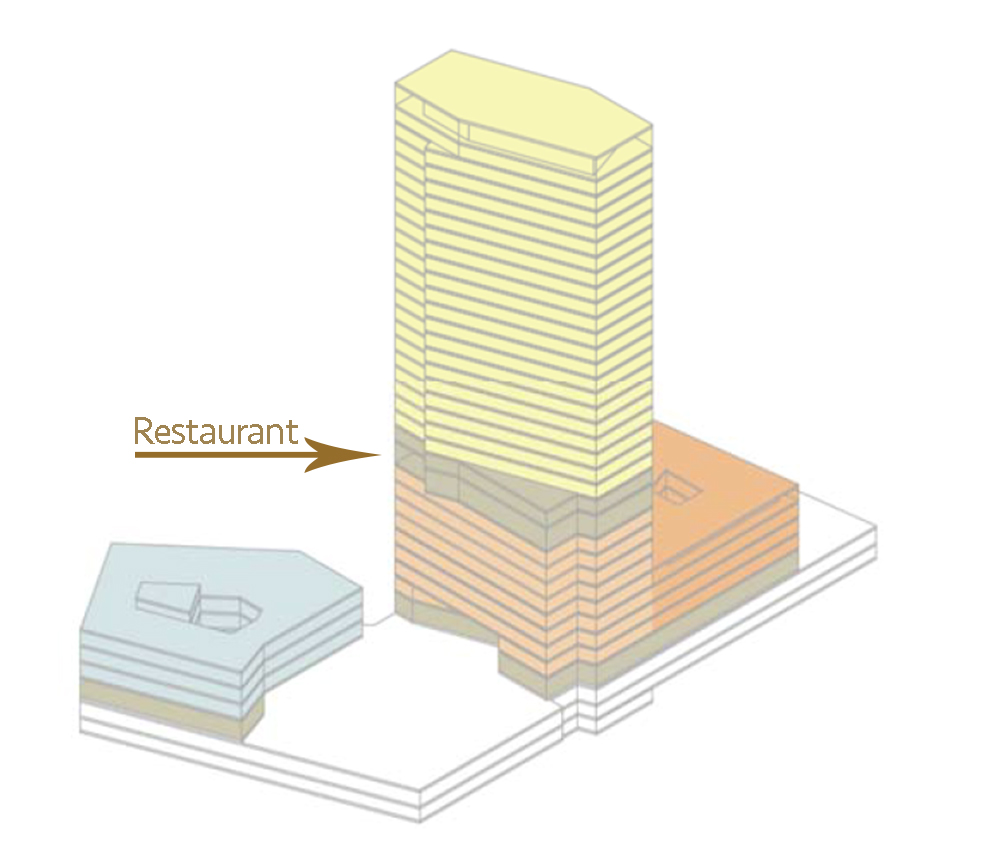 In addition to the execution details of the building itself, the attached external facade is also a source of cross-floor sound transmission. Due to the different requirements and boundary conditions, the solution for the transition between the apartments could not be implemented for the transition to and from the restaurant. The installation of additional facing shells was necessary to achieve acoustic optimization and to meet the requirements. Measurements have shown that the solution works.

The trick is in the details

Apartment doors - Sound is like water, it seeks its way. Where resistance is lowest and / or conditions are best, it then mercilessly slips through - to the chagrin of the victims in front of or behind it.
The apartment entrance doors were initially outside the permissible sound criteria with the planned solution of a simple joint between the wall and the door. After the installation of an additional putty joint on both sides, the target values were then met - a simple but efficient measure.

Loggias - For once, the passing trains of the nearby railroad line also showed their downside from an environmental point of view. On the exposed sides and apartments, special noise protection measures therefore had to be taken to comply with the permissible limits. The affected loggias were accordingly provided with a soundproof parapet - purple element in the right picture above. Even with open doors and windows, the permissible noise limits could thus be complied with. 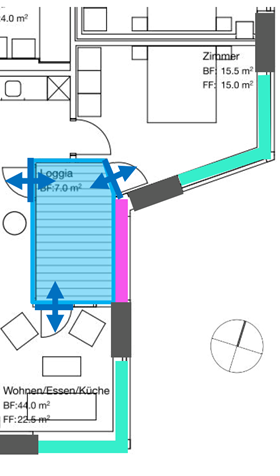 Shadowing - Speaking of the shady side - the shadowing of the building has also shown that the residents of the buildings in the "cover" are not sitting in the dark for too long. "Be gentle" - a good neighborhood is still worth a lot, as always.

Conclusion: From the rough to the detail - we've got it covered.

In large-scale projects, it is often necessary to keep an eye on overarching issues. At the same time, however, the functioning detailed solution and implementation on the construction site must not be lost sight of. Both Grolimund + Partner and all project participants succeeded well.

Thanks to new technologies and services, the availability of 3D data is constantly increasing. At the technical event on 28.03.2017, we showed which new possibilities arise for the planning of a road construction site, how noise calculation models can be improved and how BIM can also be used directly on the construction site in the future.
Under the title "Dreierlei Wunderkammern" ("Three Chambers of Wonder"), the SIA journal TEC21 describes in its 11/2021 issue the transformation of Burgdorf Castle from administrative headquarters and prison to an inspiring meeting place for the population. At Grolimund+Partner AG, this project continued a series of extraordinary projects around well-known and protected castle buildings.
The road noise calculation model dates back to the 1980s! 40 years later, SonRoad18 is the new Swiss standard: modern car fleet, current urban realities, electric mobility, meeting zones: new key parameters that Grolimund + Partenaires has integrated into its tools. We can better describe the situations experienced by residents, better communicate potential noise reductions.